The cavalry is coming!

I've had quite the productive week. I've managed to finish building and spraying all cavalry, including the leader types for both forces. I've also built and sprayed the cannons and a few of the infantry men. And I've put the farmhouse together. So, I now have to decide what colours to use. I have to say that I'm leaning towards painting the Union force as a coloured force which for me would mean either the 54th Massachusetts or the 4th USC because I have books on both and I can at least look stuff up. However, I don't yet know if either of those regiments fought with zouaves, since there are obviously zouaves in the box. I shall have to investigate and find out what's what.

I have to say putting all this together has been relatively simple. I have chosen to put the cavalrymen on their horses because I am a bit lazy and didn't want to paint them separately. I put them slightly staggered on their bases to make them fit better together and I'm quite happy that their 'movement' looks better as well.

I've called it Standish farm because I will use this in my Old West games as well. Mike Standish, his wife Sierra and their dog Foxtrot will be painted later on. 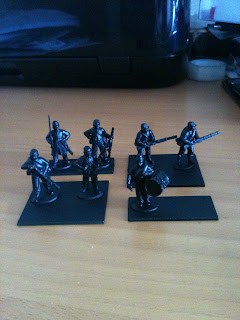 The observant among you might have noticed my strange basing for the infantry. I'm only doing this so I can easily paint the models. I don't have any wooden stirrers or something to put them on, so I thought I'd do it like this. I'll base them properly after they're painted. Right, next time hopefully some stuff with a little bit of paint on.

Email ThisBlogThis!Share to TwitterShare to FacebookShare to Pinterest
Labels: ACW

14 horses and a cannon

I recently bought Perry Miniatures' Battle in a box. This is my first real go at historical wargaming and I feel like I've unlocked a new level of nerd. I've always wanted to play ACW games but never really got round to it. I, like many gamers, suffer from the SNM (Shiny New Miniatures) syndrome so I am easily distracted but this is a properly big box full of miniatures. 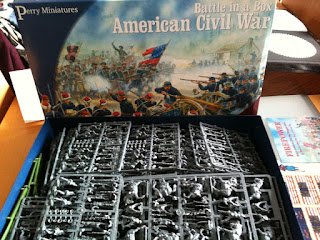 I like that I can make 2 small forces and it comes with rules as well so I should be able to actually play a few games with them. However, this does mean that I have to put together and paint the 170+ miniatures first. Ouch!
Anyway, I've begun putting together some miniatures and I have to say, so far so good. I've decided to start with the horses because I don't particularly like to paint them. The sooner they're done, the better I reckon. 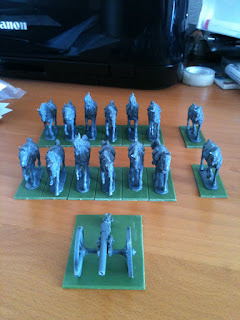 14 horses and a cannon. That means all the horses are done and I've only got another 3 cannons to do. I haven't decided on whether I want generic Union and Confederate armies or whether I want to paint up known regiments. I have some books on uniforms so I guess I'll be checking them to see if anything strikes my fancy.
Posted by Groove51 at 15:41 No comments:

Email ThisBlogThis!Share to TwitterShare to FacebookShare to Pinterest
Labels: ACW

Well, this is it. I'm finally taking the plunge. I've been thinking about starting a blog for a while and I've finally decided to give it a go. This will be a blog mostly about toy soldiers. I've been painting and playing for about thirty years, which seems like a ridiculously long time. I am not a master painter and, as everyone who has ever played a game with me can attest to, I am definitely not a master tactician. I just enjoy putting together, painting and playing games with toy soldiers. And of course rambling on about it. And for those of you who are wondering where the title of the blog comes from; I used to play basketball and I'm 5'9".
Posted by Groove51 at 14:57 1 comment: